Tyne and Wear Fire and Rescue Authority is the publicly accountable body that oversees the policy and service delivery of fire and rescue services on behalf of the community.

Tyne and Wear Fire and Rescue Service leads the operational delivery of fire and rescue services such as public protection, fire and other emergency prevention, operation response and resilience.

The Fire Authority and the Service work closely together to help create the safest community.

The Authority has 16 elected members, nominated by the five constituent councils of Tyne and Wear in line with Schedule 10 of the Local Government Act 1985. The Police and Crime Commissioner for Northumbria also sits as a Fire Authority member.

The Authority has established a Governance Committee which seeks to promote and maintain high standards of conduct by members of the Fire Authority and to assist members to observe the Code of Conduct.

Any breaches of the code should be reported to the Monitoring Officer to the Fire Authority who is the Head of Legal Services at Sunderland City Council. They will determine whether the complaint should be investigated and if so by whom.

Subject to the Member’s consent, the public may also inspect the register of gifts and hospitality. 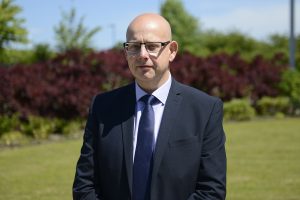 Tony was born in Hetton-le-Hole and has spent most of his working life within the brewing, warehousing and distribution industry.

After gaining experience as a Trade Union representative / Branch Secretary over many years, Tony became more active within local politics and was duly elected in December 2014, as a Ward Councillor on Sunderland City Council, representing Washington East Ward.

As a Councillor, Tony has served on various Committees, including Planning and Highways, Development Control, Economic and Prosperity Scrutiny Committee and Tyne and Wear Fire Authority. He is also a Non – Executive Director / Trustee of Citizens Advice Bureau Sunderland.

Tony is happily married to Sue and lives at Teal Farm, Washington. In addition to volunteering in the local community, Tony’s interests include motor cycling, music, reading and travelling with his wife.

More information about each member is available on the Sunderland City Council website.