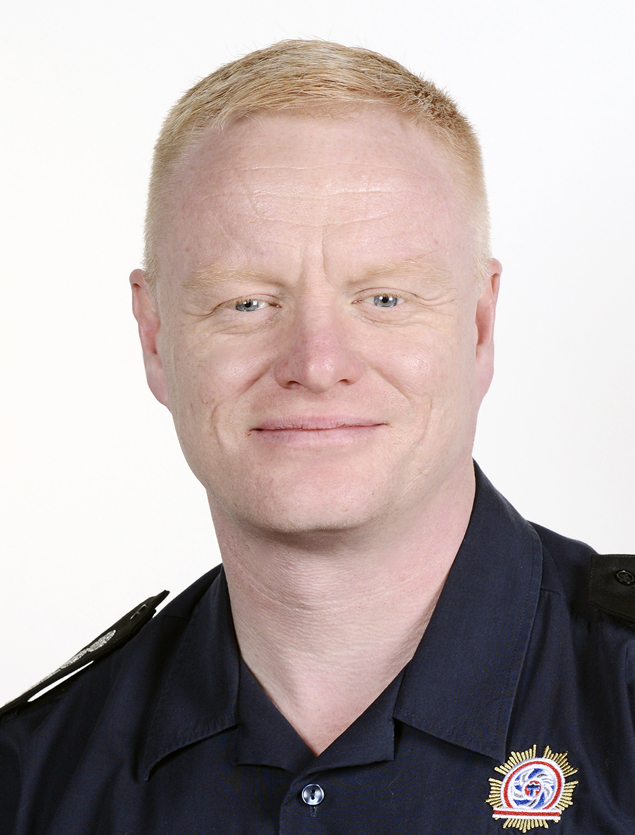 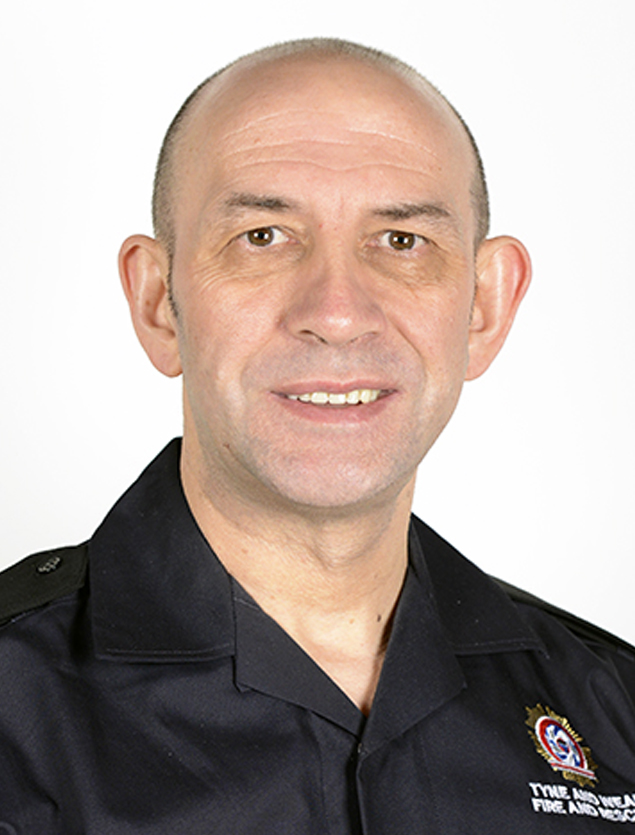 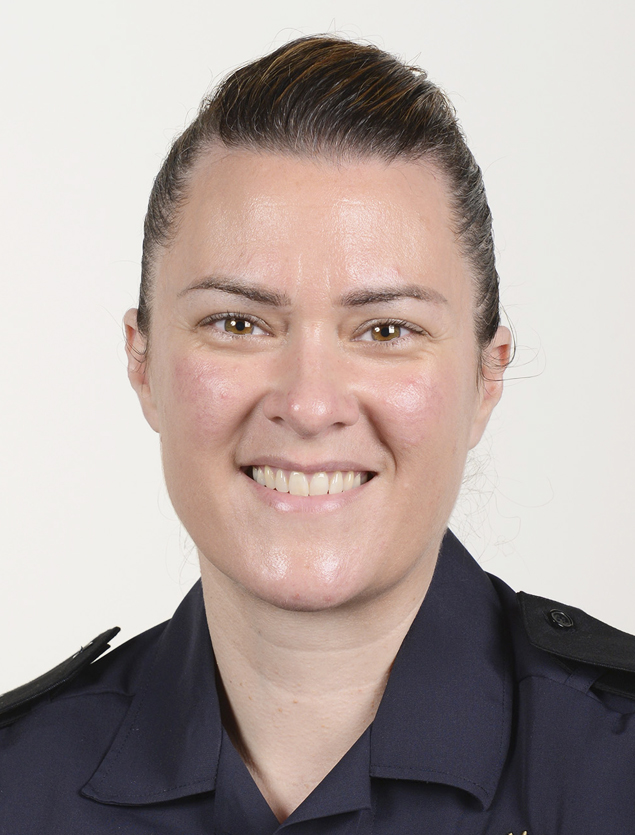 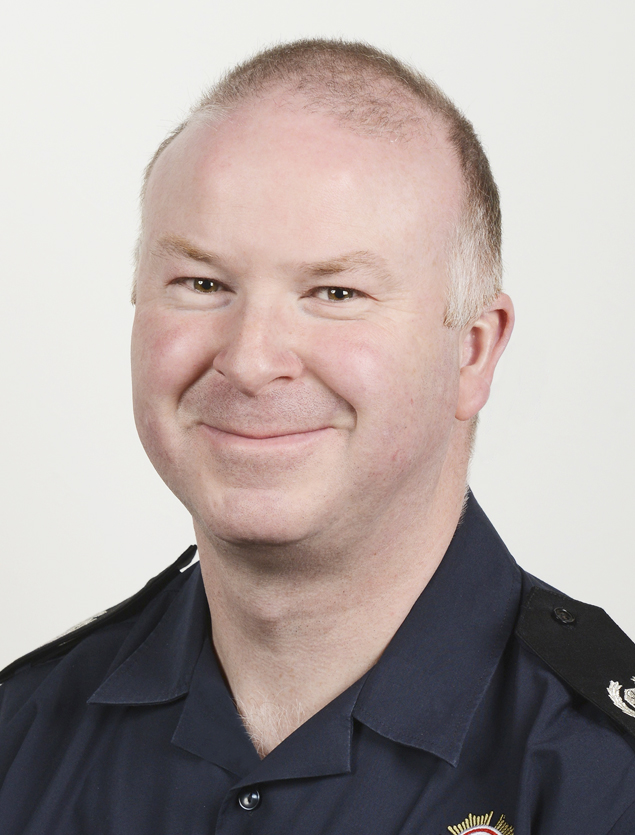 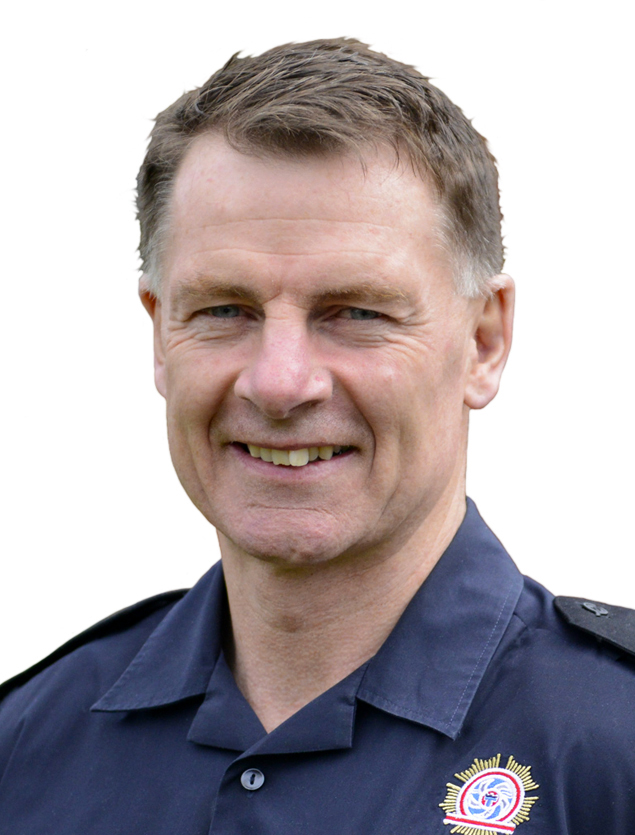 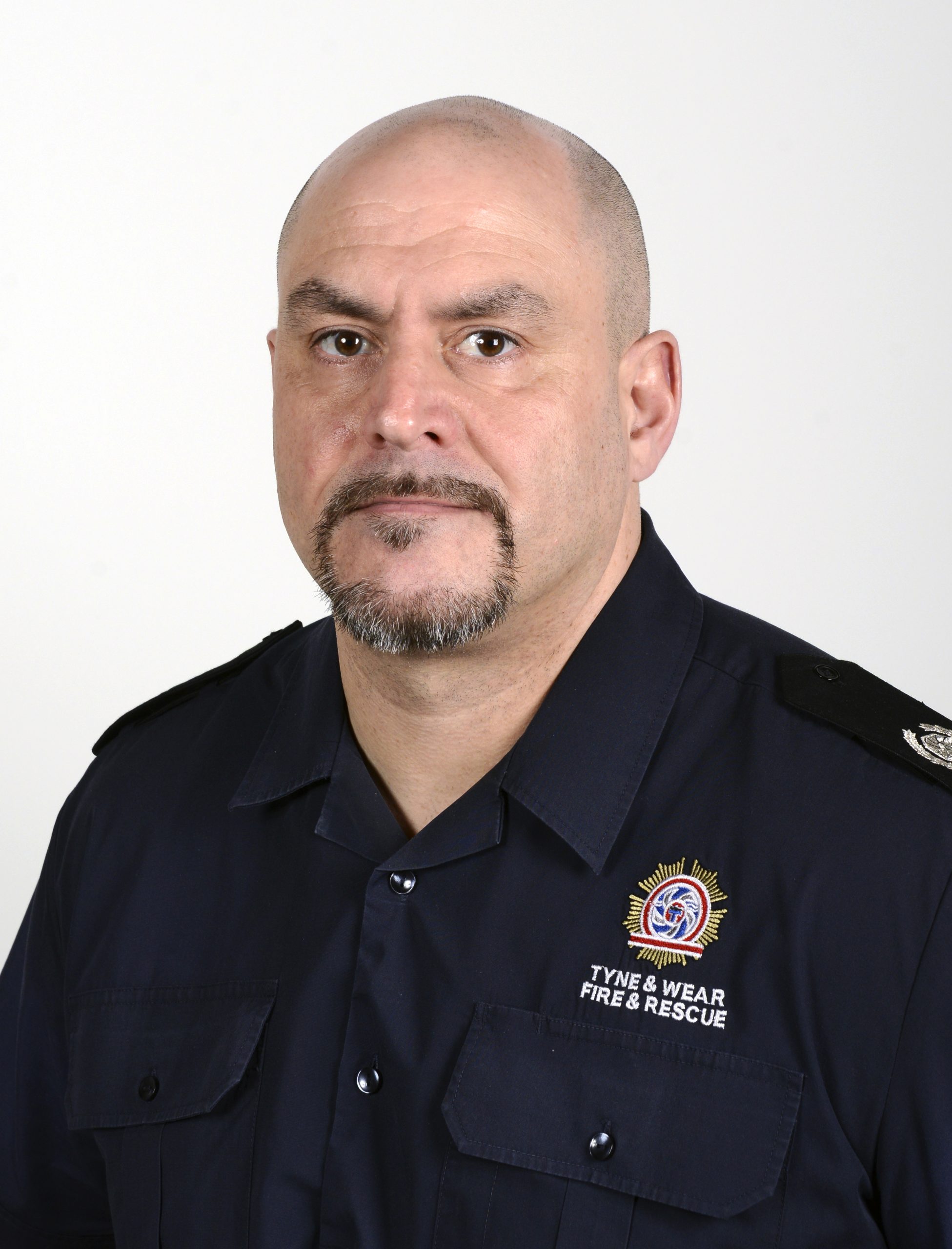 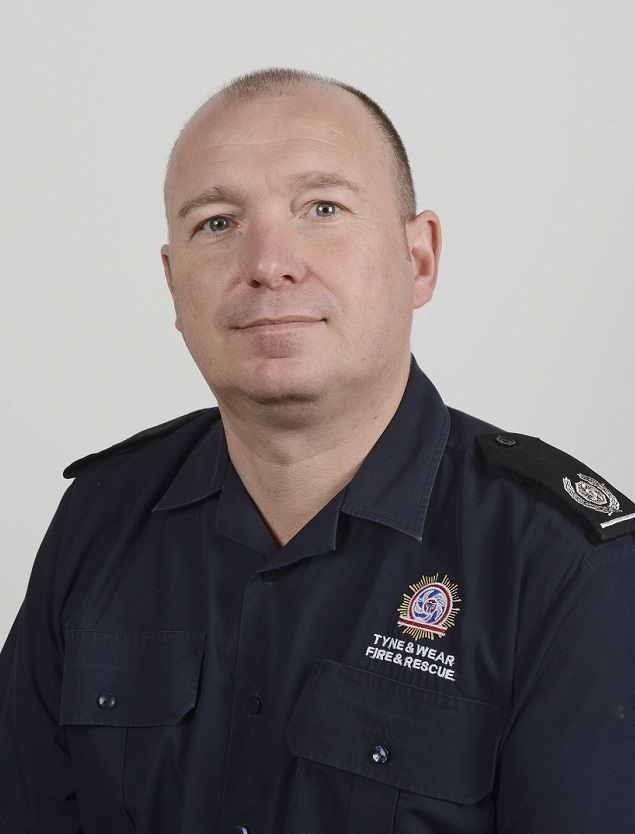 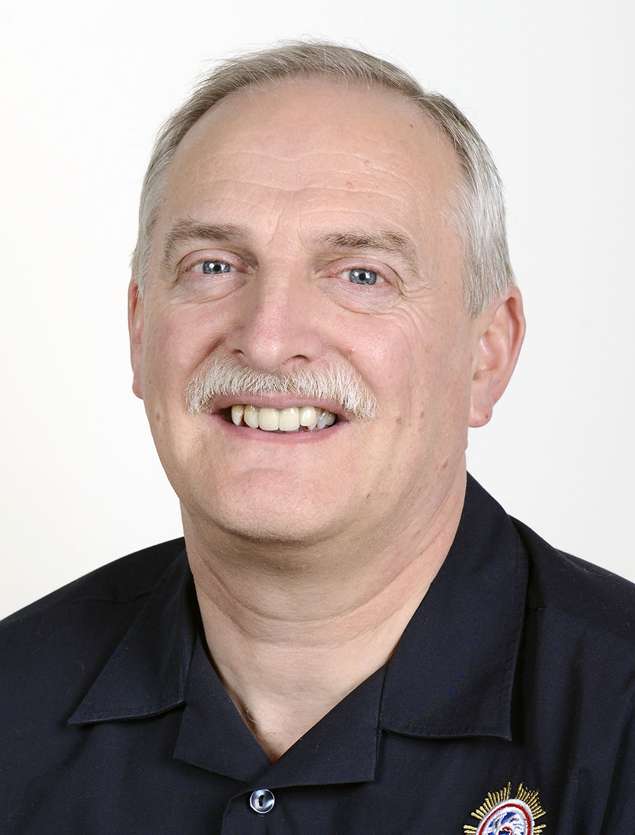 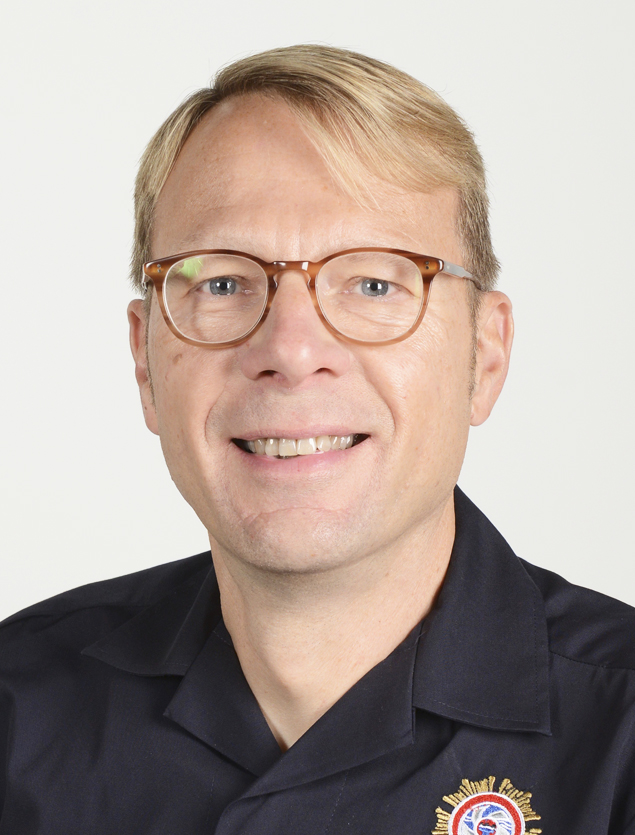 Chris started his career as an operational firefighter based at Gateshead Community Fire Station in 1997.

He has an impressive and varied background in training, community safety and operations and has taken a lead role in a number of national resilience programmes.

He was appointed Chief Fire Officer in February 2017, taking up the post in April 2017. Chris has held a number of roles within the fire service, including Station Officer for community safety, during which time he was instrumental in introducing home safety checks which have significantly reduced fires in the home.

After joining the Strategic Management Team in 2009, Chis worked as an Area Manager and then in 2013 was appointed Assistant Chief Officer, assuming overall responsibility for services across five districts, operations, community safety and fire safety.

Chris sits on the Operations Co-ordination Committee (OCC), the lead body for Urban Search and Rescue (USAR) and he was the project executive for the national guidance work on transport.

Policy and collaboration are integral to Chris’s current role and will continue to be a focus going forward. He works collaboratively with Northumbria Police and other key partners, and the implementation of the Integrated Risk Management Plan is an important part of his remit.

Under his leadership, Tyne and Wear Fire and Rescue Service will focus on workforce reform and broadening and strengthening our contribution to our community.

Peter joined TWFRS in January 2020 from the Scottish Fire and Rescue Service, where he was Deputy Assistant Chief Fire Officer and Head of Response and Resilience.

Peter joined Lothian and Borders Fire Brigade in October 1992 and served at several fire stations across Edinburgh and the Scottish Borders as Firefighter, Leading Firefighter, Sub Officer and Station Officer.

He also held roles as a Fire Safety Enforcement Officer, training Officer, in Operational Planning as well as a range of managerial and leadership roles including a two-year secondment to the Scottish Fire Services College as a Group Manager in the learning development team.

In 2013, following the creation of the Scottish Fire and Rescue Service, Peter was Programme Manager and led work on Operational Response and Resilience to ensure readiness for the commencement of the new service on day one.

Lynsey began her career with Cumbria Fire and Rescue Service in May 2000 where she initially served as a firefighter at Carlisle Fire Station. She progressed to become a Crew Manager at Workington Fire Station then took on a Watch Manager role.

In 2008 Lynsey took a national secondment, which involved developing and delivering the Enhanced Command Support capability as part of the National Resilience Programme.

On her return to Cumbria she worked as part of the Operational Training Department and played a key role in establishing a new incident command school. Lynsey then progressed to the role of Flexible Duty Station Manager in service delivery, overseeing both whole time and retained fire stations.

She went on to manage the initial fire control transition from Cumbria to Cheshire Fire and Rescue Service. This project developed further with the agreement of the introduction of a North West Fire Control function which was to be based in Warrington.

As Transition Manager for North West Fire Control, Lynsey managed the changeover of Cumbria’s mobilising function into the regional facility. She later took on responsibility for a number of strategic projects on behalf of Cumbria.

In May 2015 Lynsey secured a Group Manager position with Cheshire Fire and Rescue Service, where she was responsible for the Operational Policy and Assurance function. This included:

She spent 12 months in the role then transferred to service delivery, where she was responsible for Warrington and Halton unitary areas.

Lynsey is an avid supporter of staff networks in order to encourage and support minority groups and members of the local community.

She was the North West Regional Representative for Women in the Fire Service for several years. She was also an active member of Cheshire’s FirePride network and successfully launched women’s networks in both of her previous services.

Phil went on to work in fire safety for several years, holding various positions across Tyne and Wear before becoming Fire Safety Station Manager at North Tyneside. He then moved to service headquarters, where he was involved in refining the risk based inspection programme.

He also worked on a project to improve risk information, ensuring firefighters have the right information to safely deal with any potential hazards when attending an incident.

In 2011 Phil became a Group Manager and has fulfilled several roles, including operations and resilience, fire safety and North Tyneside District Manager. He managed projects including a review of fire safety and the developing the Primary Authority Scheme, which was introduced as part of the government’s better regulation agenda.

Phil is currently Area Manager for Strategy and Performance. He graduated from the University of Central Lancashire in 2003 with a Bachelor of Engineering in fire engineering. He has used this to support a number of projects including the development of the second Tyne Tunnel crossing, where he was instrumental in the installation of a fixed fire suppression (sprinkler) system.

Prior to joining fire and rescue, Phil worked in sales within the John Lewis Partnership.

Richie began his career as an operational firefighter based at Hebburn Community Fire Station in 1993. He went onto work at a number of community fire stations including Fulwell, South Shields, Rainton Bridge and Sunderland Central.

Richie joined the Operations Department working on various projects both at Pilgrim Street then at the new SHQ in Washington when the Service relocated. After graduating from the University of Central Lancashire in 2005 with a Bachelor of Fire Engineering in Fire Engineering, he moved into the Fire Safety Department as a Watch Manager covering the South Tyneside area.

During this time Richie worked to embed the Fire Safety Order and new ways of working for the Service, including the diversification of the workforce – in which the department introduced a new cohort of external applicants with new and exciting skill sets. During this time he also introduced the Enforcement Logic, which was adopted and preceded the Regulators Code being introduced nationally.

In 2012 Richie was promoted to Temporary Group Manager and has since fulfilled a number of management roles including setting up the Risk Team.

Following the Grenfell Tragedy in 2017, Richie has worked regionally and nationally to provide support, guidance and leadership to fire and rescue services through the National Fire Chiefs Council. This has enabled TWFRS to influence and shape national policy and fire safety legislation to ensure that the people of the North East are adequately protected.

Prior to joining the Service, Richie served 6 years in the HMS Royal Engineers.

Dave started his career with Derbyshire Fire and Rescue Service in April 1997 where he served as an operational firefighter based at Buxton Fire Station.

In September 1998, Dave joined TWFRS as an Inter Service Transfer and was initially based at Pilgrim Street Fire Station as an operational firefighter, in 2006 progressing to Crew Manager and then Watch Manager, Dave served across a number of Community Fire Stations including, Wallsend, Newcastle Central, West Denton and Gosforth.

On being promoted to Temporary Station Manager at Byker Community Fire Station Dave played a key role in supporting and enhancing Tyne and Wear’s only water based response station. He was instrumental in introducing SFRBOI’s into the Service.

As a Group Manager, Dave has served in a number of roles including District Manager for Newcastle and Head of Service Delivery West where his focus was on managing service delivery performance, building partner relationships within local Community Safety Boards in Newcastle and Gateshead promoting community safety and firefighter safety. As Head of Operational Standards, he dealt with all areas of staffing including, diversification of the workforce, promotions and recruitment and the Service lead on NFCC On-Call practitioners Group.

Dave is currently Area Manager for Service Delivery ensuring we have the right people, with the right skills, at the right place, at the right time based on risk and demand to provide the fastest and most effective operational response to the community of Tyne and Wear.

Prior to joining the Service, Dave served 4 years with HM Forces, Corps of Royal Engineers and 1 year working in Debt Collection for the Department of Social Security.

Tony joined Tyne and Wear Fire and Rescue Service in 1995.

He worked in a range of operational roles before becoming District Manager for Newcastle in 2010.

He represented the Service as a member of the Local Strategic Partnership and the Crime and Disorder Partnership, working closely with the local authority and partners for the health, wellbeing and safety of the city.

In 2017, he took the role of Head of Prevention and Education and in 2019 became Head of Operations.

Tony became involved with the Firefighters Charity in 2006 as station representative, then Service Co-ordinator in 2008 and Regional Co-ordinator in 2016. This involves working to engage with other service co-ordinators across the region to raise money and awareness of the charity.

Dennis began his career in the private sector, before joining the accountancy section of Sunderland City Council in 1978. He gained his AAT qualifications and qualified as a CIPFA Accountant in 1985.

He has wealth of experience and knowledge of public sector finance, specialising in local government and fire service related finance.

He also provided a full financial service to external bodies including Beamish Museum, Bowes Railway Ltd and the former Tyne and Wear Development Company Ltd. More recently he advised on the technical issues in respect of the council’s newly created ‘Care’ trading companies.

Dennis joined us in October 2016. He is responsible for the finance and procurement functions of the Authority and is also the statutory Section 151 Officer for the service.

John works closely with our other senior managers to provide strategic direction for the Service and inform Fire Authority decision-making.

He has extensive experience of Human Resources and Organisational Development with a strong record of leading complex services and projects in demanding, dynamic circumstances.