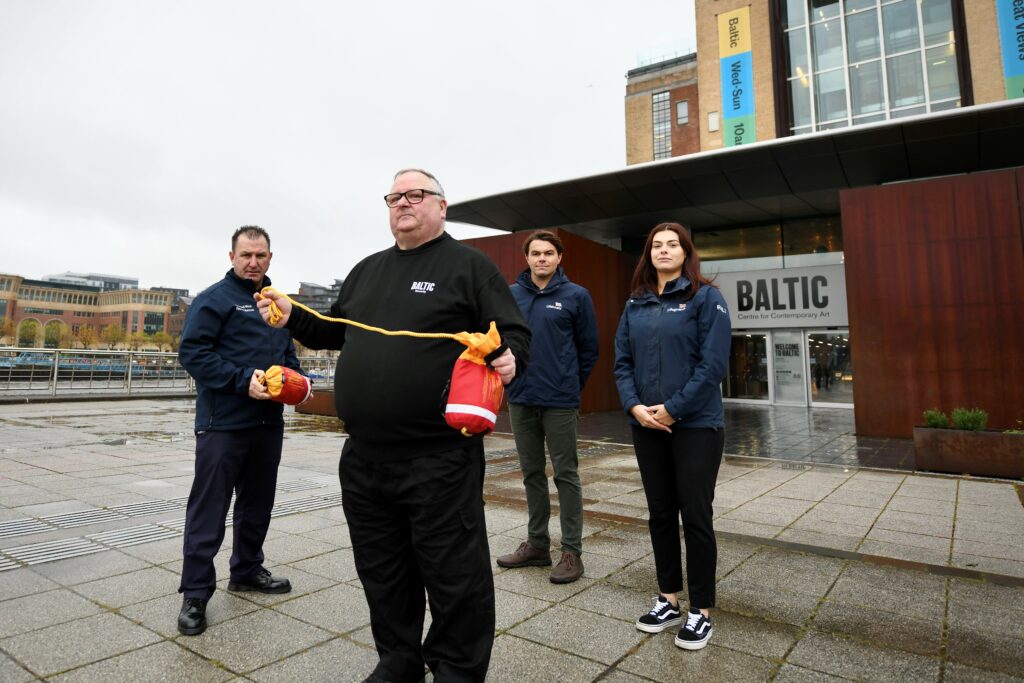 A reveller on a night out in Newcastle will always be eternally grateful to a Tyneside security guard – whose speedy actions and ingenuity saved his life.

John Dickinson, a security supervisor for Baltic Centre for Contemporary Art in Gateshead, acted quickly to save the man’s life after he got into difficulty in the River Tyne.

Not only did the grandad-of-six make the crucial 999 call to the emergency services but he was able to provide police with lifesaving throwline equipment when they arrived on scene.

The throwline equipment had been introduced at Baltic following a training session between Tyne and Wear Fire and Rescue Service (TWFRS) and the RNLI.

It helped keep the lucky partygoer, who was visiting the city on a stag do, afloat before he was later plucked from the water by TWFRS firefighters.

TWFRS are reflecting on this water rescue in the River Tyne as November 21st sees the launch of the Royal Life Saving Society UK national Don’t Drink and Drown campaign.

The campaign is being promoted ahead of the busy FIFA World Cup 2022 and festive period where people may be drinking near to the region’s waterways.

On Thursday, the TWFRS head of Community Safety, Richie Rickaby, has said the reveller rescued by firefighters could easily have lost his life.

But he has also praised the quick actions of security guard John, 61, who notified emergency services and provided the first responders on scene with the throwline.

Area Manager Rickaby said: “The region has some beautiful waterways but these idyllic settings can become very dangerous if people enter the water under the influence of alcohol.

“Cold water shock can be deadly and if you have had a drink then your reaction time is even slower, making it more difficult to get to safety.

“This is why, especially around this time of year, we would advise people to take extra care when walking near to rivers, lakes and ponds after being on a night out with friends.

“The best guidance would be to take public transport home or get a lift from a designated driver. You certainly shouldn’t be entering the water as a joke.

“The reveller rescued by firefighters could easily have been killed if it wasn’t for the quick actions of John and the emergency services.

“We are proud of both him, and the work we do with organisations like the RNLI and RLSS UK, in raising awareness of water safety and being able to save people’s lives.”

TWFRS regularly works with the RNLI to deliver the Waterside Responder Scheme, which provides essential water safety and throwline training to groups and businesses, free of charge.

This is the exact training programme that was successfully delivered to staff members of Baltic Centre for Contemporary Art, and led to security guard John being able to pass on priceless lifesaving advice on the night of the near-drowning incident back in August of this year [early hours of Sunday August 21st 2022].

John, has worked in the North-East security industry for the past 40-years with 16 of those years working at Baltic, said: “I knew if the lad was in the freezing cold water any longer things could have gone seriously wrong, and possibly prove fatal as the guy was stuck in the river.”

John continued: “I dashed down from the office to see what was wrong, and if I could help in anyway.

“I saw the lad was still in the water so I asked if anyone had called the emergency services, of which their reply was no. I got my phone and called for assistance straight away.”

John greeted two officers from Northumbria Police. He’d recalled the throwline water safety training and went to get the specialist equipment from his office.  This essential knowledge now ensures that the young reveller is alive to tell the tale.

John was informed that the reveller had jumped from the Millennium Bridge in to the water and swam across the River Tyne towards the Gateshead quayside. 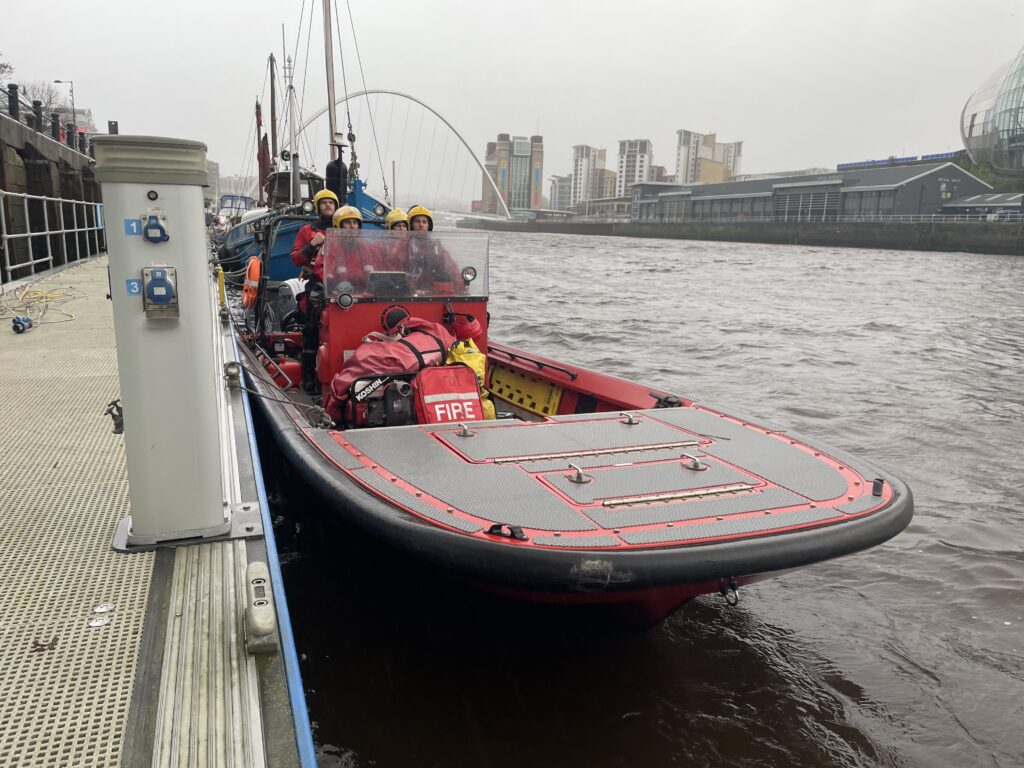 TWFRS firefighters from Byker Community Fire Station on the Fire Boat pictured on the River Tyne.

Subsequently, fire crews from Byker, Gateshead and Newcastle Central Community Fire Stations were also in attendance of the water rescue after being requested during John’s 999 call, in particular, the Fire Boat whose crew removed the intoxicated person from the river.

John is married and has five children, and six grandchildren. He said he thinks of his family when recalling his role in the rescue.

He said: “Being aware of the water safety training and knowing we had one of the throwlines in the office came second nature to me, and I’m just pleased it helped to save someone’s life.

“As a father and grandfather my advice to young people thinking of swimming or jumping in to the river after a night out is simply…don’t do it! You could ultimately lose your life and leave your friends and family devastated, and have to live with your lose forever.”

Since the introduction of the throwlines over three-years ago in locations across Tyne and Wear, six people’s lives have been saved.

On average each year 80 people lose their lives in the UK through substance-related drowning, and it is feared that a tournament such as the FIFA World Cup, at this time of year, may increase those tragic incidents.

The RLSS UK’s Don’t Drink and Drown campaign is encouraging everyone to ‘Be a Mate’ and ensure their friends get home safely, and find a route home away from the water.

“This year RLSS UK’s Don’t Drink and Drown campaign has been extended to cover the period of this year’s World Cup tournament and the Christmas period. This is the first time that the World Cup will have been held during our winter time, so it will be a completely different experience to what we have been used to in previous tournaments when we may have seen people in pub beer gardens, watching the games on a big screen in the summer sun, which will inevitably come with some challenges.

“This paired with the celebrations around Christmas comes concerns around water safety. We want to ensure that everyone enjoys the tournament and the festive period, but they are also able to stay safe around the various waterways on their routes home.”

“Everyone here at the RNLI is proud of the selflessness of the staff who all played a crucial role here, ultimately a life has been saved.

“The staff here at the Baltic have demonstrated exactly what the aims of the Waterside Responder programme is set to do. John and his colleagues received the lifesaving training and information from us in partnership with the Tyne and Wear Fire and Rescue Service as they are the ones most likely to be there at times where risk is most prevalent.

“The idea behind training staff or volunteers at pubs bars and restaurants is that they will be able to encourage good behaviours in that environment by giving the public knowledge and advice, and they will ultimately know what to do if someone did enter the water.

“We encourage any waterside venue or business to sign up to this free training on our website.”