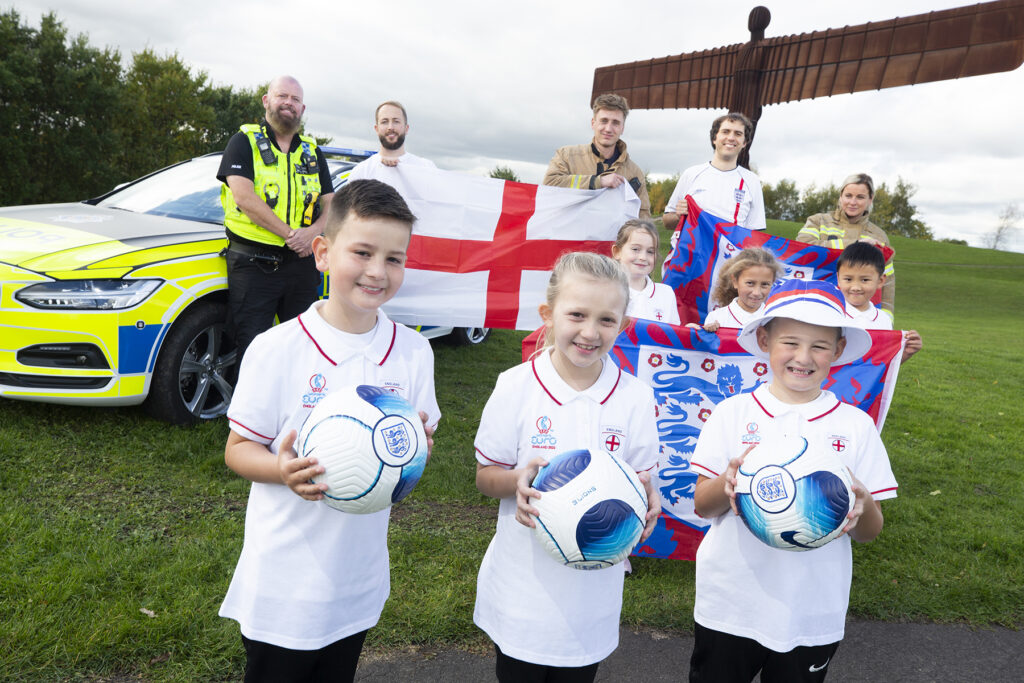 People across the North East are being urged to kick drink and drug driving out of the FIFA World Cup by taking a zero tolerance approach when it comes to road safety.

Children from Harlow Green Community Primary School in Gateshead have joined Road Safety GB North East and the emergency services including Tyne and Wear Fire and Rescue Service and Northumbria Police to encourage people to enjoy the football, but to say no to getting behind the wheel after drink or drugs.

With the FIFA World Cup tournament set to get underway in Qatar from next Sunday (Nov 20), the road safety group, along with police and fire officers, have joined together to urge people to plan their transport home if they are planning to drink while watching the matches, and to do their bit to stop other people driving impaired.

They are also being reminded they may still be over the limit the next morning. It takes roughly one hour for one unit of alcohol to leave your body. A large glass of wine or strong pint of beer contains three units.

During both the World Cup in 2018 and Euro 2020, there was an increase in drink and drug driving injuries both on the day of and the day after England’s matches, with casualties rising from 10% to as much as 20% of all road injuries.

“We’re really looking forward to the World Cup and hope England do us proud again, but we want people to do the right thing and to keep both themselves and others safe on the roads,” said Peter.

“We know that people tend to socialise and drink more during the World Cup, and with Christmas coming, too, there’s even more reason for people to celebrate.

“Go out and have a great time but leave your car keys at home if you’re planning to drink; don’t even be tempted to have one drink – it can so easily lead to more. Either be the designated driver and stick to soft drinks or plan your transport home beforehand.”

In the five-year period between 2017 and 2021, there were 1,082 people injured in collisions that involved a suspected drink or drug-impaired driver in the North East. Of these people, 781 were slightly injured, 274 were seriously injured, and 27 were killed.

They accounted for 13% of all fatalities on the roads during this period.

While the total number of road casualties in the region has reduced over a five-year period from 237 in 2017 to 198 in 2021, the number killed or seriously injured has remained at around the same number, with 56 in 2021 compared to 57 in 2017. This is despite the Covid pandemic having a big impact on the number of vehicles on the road during both 2020 and 2021.

Steven Thomas, Group Manager, Prevention and Education at Tyne and Wear Fire and Rescue Service, said: “We would like to remind people who’ve enjoyed a drink while watching sporting events the dangers of getting behind the wheel whilst under the influence of alcohol or drugs.  If you suspect a person under the influence is planning to drive, encourage them not to. Don’t let an impaired driver risk your life.”

The number of drink and drug drive casualties usually increases over the Christmas period too, with numbers becoming particularly high from December 23 through to New Years’ Day.

During this period, 23% of all injuries involve a drink or drug impaired driver, and this increases to 30% for those killed or seriously injured.

The following table is a breakdown of drink/drug drive casualties by local authority area from 2017-2021. The figures in County Durham and Northumberland are expected to be higher as those counties are bigger. 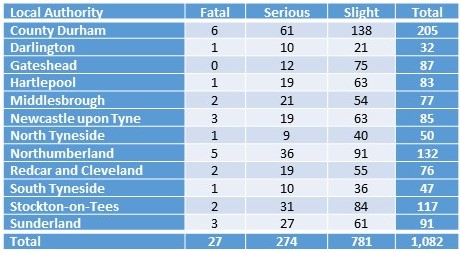 The following table is a breakdown of the percentage of total injuries that drink/drug drive casualties account for in each local authority area from 2017 to 2021: 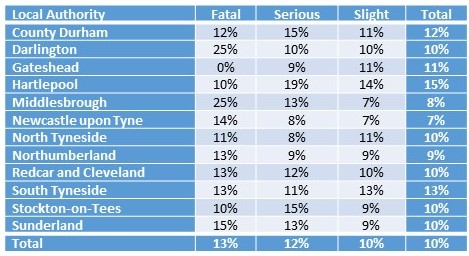 “Although we all want people to enjoy themselves over the coming World Cup and festive period, it is important for our community to do so safely,” said Mr Malik.

“Unfortunately, we know the devastation that can happen when people mix drinking and driving, which is always a huge concern. Having our children understand from an early age that these two things don’t mix is important and hopefully they can be part of an essential message that will save lives.”

“When you’ve been drinking or have taken drugs, your reaction time slows down and it’s more difficult to drive in a safe manner. Road traffic collisions can tear families apart, and it’s crucial people are aware of the potentially devastating and irreversible consequences of driving over the limit.

“That’s why we’re proud to support this campaign and we will be patrolling our region’s roads to try and make sure they are as safe as possible for all users.

“If you’ve been under the influence, it’s important to remember that you may still be affected the next day and could lose your licence if you drive and are still over the legal limit. If you’re in any doubt, don’t get behind the wheel.”

Inspector Kevin Salter, from Durham Road and Armed Policing Unit, said those who chose to drink and drive risked killing themselves or someone else, which would ultimately lead to prison.

“As a minimum, when caught, offenders risk losing their licence, and potentially their livelihood as a result. We’re all looking forward to the World Cup, but I would encourage anyone going out to celebrate to arrange their transport home beforehand. Our message is simple, don’t drink and drive.”