Canadian firefighter travels over 3,000 miles to visit Newcastle fire station in honour of his late grandfather 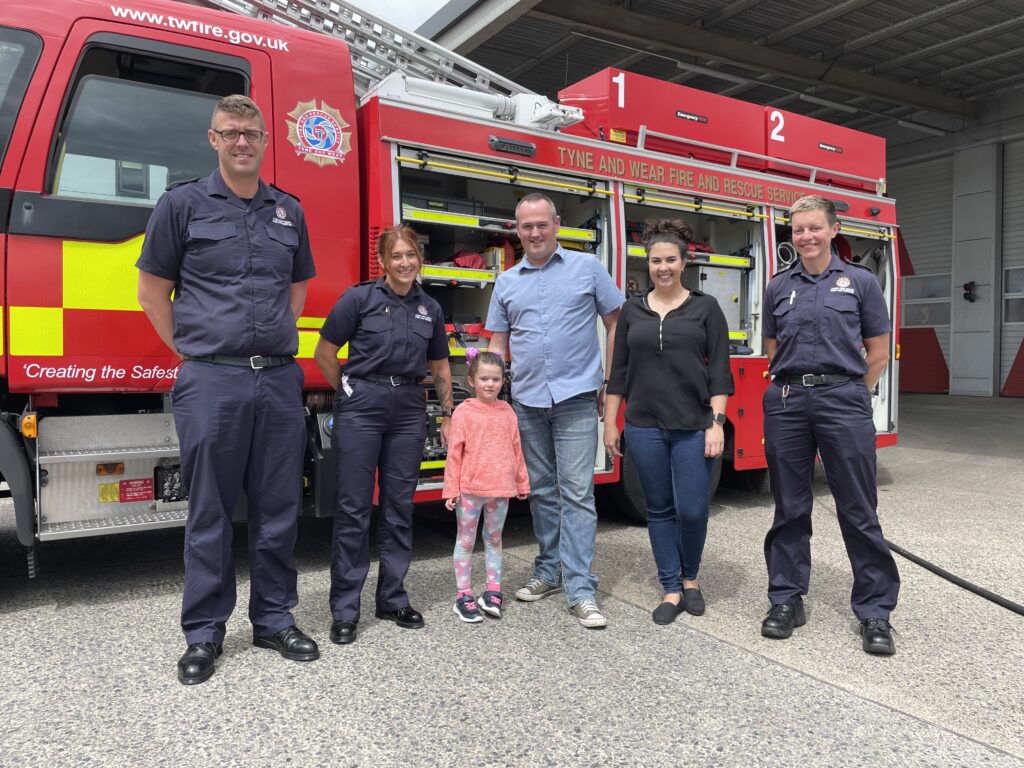 Rob, Cassandra and Brynn pictured alongside one of the TWFRS appliances with firefighters Steve Wilkins, Fionn Brown and Victoria Haswell.

A Canadian firefighter has travelled over 3,000 miles to walk in the footsteps of his late grandfather – and visit the fire service where he became a hero.

Rob Wilson, a serving firefighter with Thunder Bay Fire Rescue service in Ontario, made the journey to Newcastle with his young family last week.

Together with his partner Cassandra, and five-year old daughter Brynn, they took a break from their holiday to visit Newcastle Central Community Fire Station.

It was a chance for Rob, 47, to walk in the footsteps of his grandfather Robert Wilson who inspired his career as a firefighter.

The father-of-one has revealed how both his grandfather and his great uncle, Harry Wilson, served with Tyne and Wear Fire and Rescue Service at Pilgrim Street Fire Station in the city centre.

Rob said it was his grandfather’s funeral in 1993 that inspired him to become a firefighter.

He said witnessing fire appliances leading his family to the cemetery, and then firefighters baring his coffin, showed him the unity of the firefighting community.

“To see first-hand the camaraderie and outpouring of love, respect and team work was very emotional,” said Rob.

“It was there and then that I decided the destination of my future career.  I was totally inspired by the sense of community shown to my family.

Rob’s journey to emulate his grandfather hasn’t been easy as it took him 16 years to be successful in joining the Canadian Fire Service.

But his persistence and ‘never give up attitude’ finally paid off as he’s now been a serving firefighter for Thunder Bay Fire Rescue for the past five years.

Rob was born in Toronto but moved as an infant with his family to Rothbury in Northumberland, North East England.

He spent most of his youth growing up in the region being educated at Dr Thomlinson C of E Middle School in Rothbury and later at King Edward VI School in Morpeth.

Rob’s folks moved back to Canada over 25-years ago and have lived there ever since. He has continued his affiliation with the North East by visiting ‘home’ when he gets the chance.

But now, Rob had the opportunity to show his family the history behind his decision to become a firefighter.

Speaking of his visit to Newcastle Central Community Fire Station in Elswick. He said: “I thought it would be neat for us all to come along to the fire hall in Newcastle and reminisce about old times.

“As I like to think that the spirits of my grandfather and great uncle still live on in the workings of the fire service even to this day.

“The makeup of the fire stations and trucks have changed quite a lot since I first visited the stations when I was a kid.

“It was great to meet some of the firefighters and swap stories about the different fire services in Canada and England.

“It has been nice to come back to where I call home and take a look around. This was an extra special time for my family as this was their first visit to Newcastle.

“It was amazing to absorb the social and profession cultures, and get a chance to get amongst it all.”

Rob said that in the short time he was back in the North East he found himself falling back into the Geordie lingo by saying things like ‘aye’ even without realising it.

During their visit to Newcastle Central Community Fire Station Rob, Cassandra and Brynn had a guided tour of the station.  They also had the chance to try out the fire hose on the appliance and sit in the driver’s seat.

“It was our pleasure to welcome and host Rob and his family at Newcastle Central Community Fire Station.  We had a great time chatting about when his grandad and great uncle were serving in Newcastle.

“It’s always fascinating to speak with fellow firefighters who ply their trade in different countries.  What always shines through is people’s desire to help others and put the safety of the community they serve before anything else.

“We wish Rob and his family a healthy and happy future, and they are welcome back here at the station anytime for a brew.”

Robert Wilson snr first joined the fire service in the early 1940s but there is a photograph in the family’s photo album dating back to 1937 where Grandad Wilson is pictured.

During his time serving the communities of Tyne and Wear he was recognised for some ground-breaking achievements including inventing the first fire ground communications in the region.

These accomplishments were rewarded with the presentation of the OBE medal from Her Majesty The Queen for his services to the fire brigade.

Robert Wilson used to live in the fire halls on Northumberland Street during his time at Pilgrim Street Fire Station.

He later retired from the service in 1971 and moved to Heddon-on-the-Wall but he kept firm connections by passing on his experience by teaching fire prevention and awareness to the future generation of firefighters.

Robert Wilson snr’s funeral took place in 1993 during a service at St. Andrew’s Church in Heddon-on –the-Wall.  His casket was then taken to West Road Crematorium accompanied by a number of fire appliances with his coffin being proudly carried into the building by serving firefighters.

Rob’s great uncle Harry Wilson also served in the brigade after WWII until 1976, and he passed away in Aug 2017.

Rob still has family in the North East with his Aunt Margret living in Heddon-on-the-Wall (that is Robert Wilson snr’s daughter); and his Aunt Zaina and Uncle John Riddle who also live in Bellingham (that is his mother’s brother).  They were able to provide Rob with some lovely family tales and photographs.