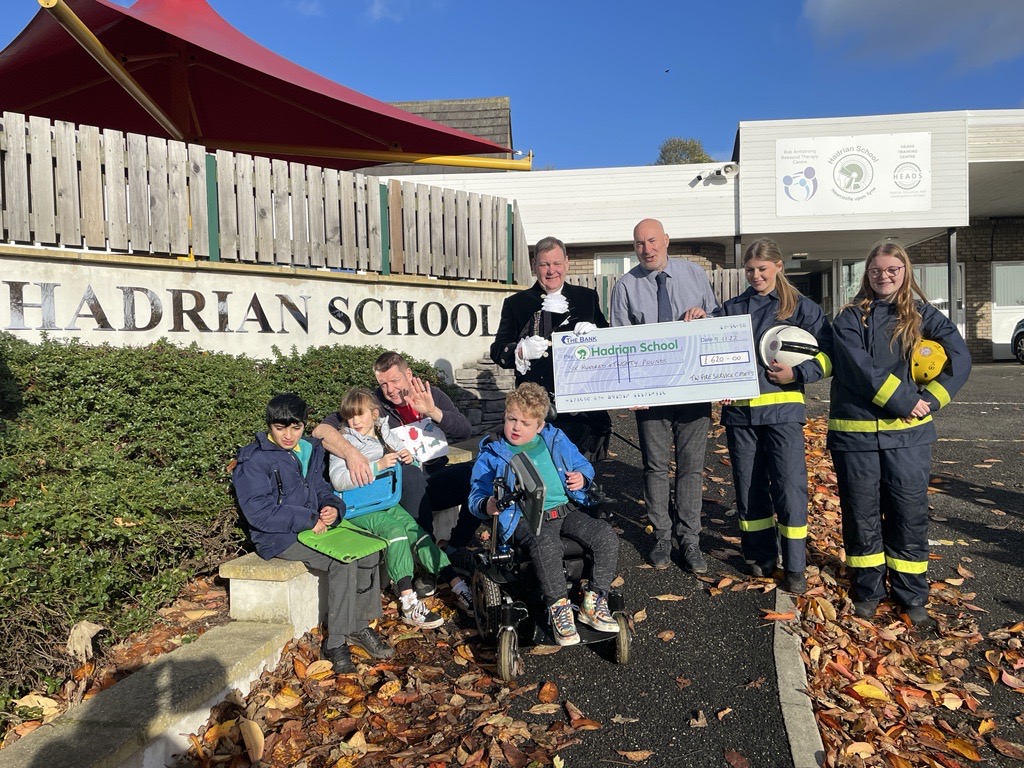 Award winning cadets give back to their community

Kind-hearted teenagers have been awarded one of the region’s most prestigious honours after raising hundreds of pounds for life-changing equipment at a Newcastle specialist school.

Cadets from Tyne and Wear Fire and Rescue Service’s (TWFRS) West Denton Community Fire Station have been awarded a High Sheriff’s commendation for their fundraising achievements.

On a visit to the cadet group earlier this year, High Sheriff of Tyne and Wear David Bavaird asked the cadets to think about how they could continue to push themselves for others.

The teenagers, aged between 11 and 17, decided to put his words into action and raise money for life-changing equipment at a local specialist school.

They hoped that they could help fund a track hoist at the Hadrian School in Newcastle that will make the school even more accessible.

So, as part of a ‘Hose Run Challenge’, the teenagers decided to put their minds and bodies to the test in a gruelling session pushing them to the limits.

It saw them run-out and reroll lengths of heavy fire hose over a distance of 2.8 gruelling miles – a task they are familiar with as they do it during their sessions.

They completed their incredibly difficult task in just 43 minutes, more than half the time they were expecting to do it.

And today (Monday) they’ve been rewarded for their efforts by receiving a prestigious High Sheriff’s Commendation at Hadrian’s School.

High Sheriff of Tyne and Wear David Bavaird praised the cadets for their continued hard work for their community.

Mr Bavaird said “The cadets every week learn new skills which help them learn a range of technical and life skills and when set the challenge they responded with imagination, determination, and hard work.

“It was a pleasure to award them the High Sheriff Commendation Award this is a perfect example of young people doing something for community good, well done to all.”

TWFRS’s Area Manager for Community Safety Richie Rickaby said “I’m in awe of the hard work and level of community engagement that the cadets have shown when fundraising for vital equipment for the school.

“Teenagers often get a bad rep with the community, but its young people like our cadets who are the true representation of our communities.

“I hope each of our West Denton cadets are as proud of themselves as I am of them.”

Deputy Head Teacher and Chair of Friends of Hadrian School Alex Rayner, said “We cannot thank the cadets enough for their commitment and enthusiasm to Hadrian School and the children we have here.

“The sense of community and support that have pledged to us as well – we are one big family and want to expand and grow our bonds with as many people as possible.

“We look forward to continuing to work with West Denton Fire Cadets.”

The cadet unit presented the school with a cheque for £620 and adopted them as a “Friend of the Cadets” meaning the cadets and the school will continue to work together to the mutual benefit of both groups of young people.