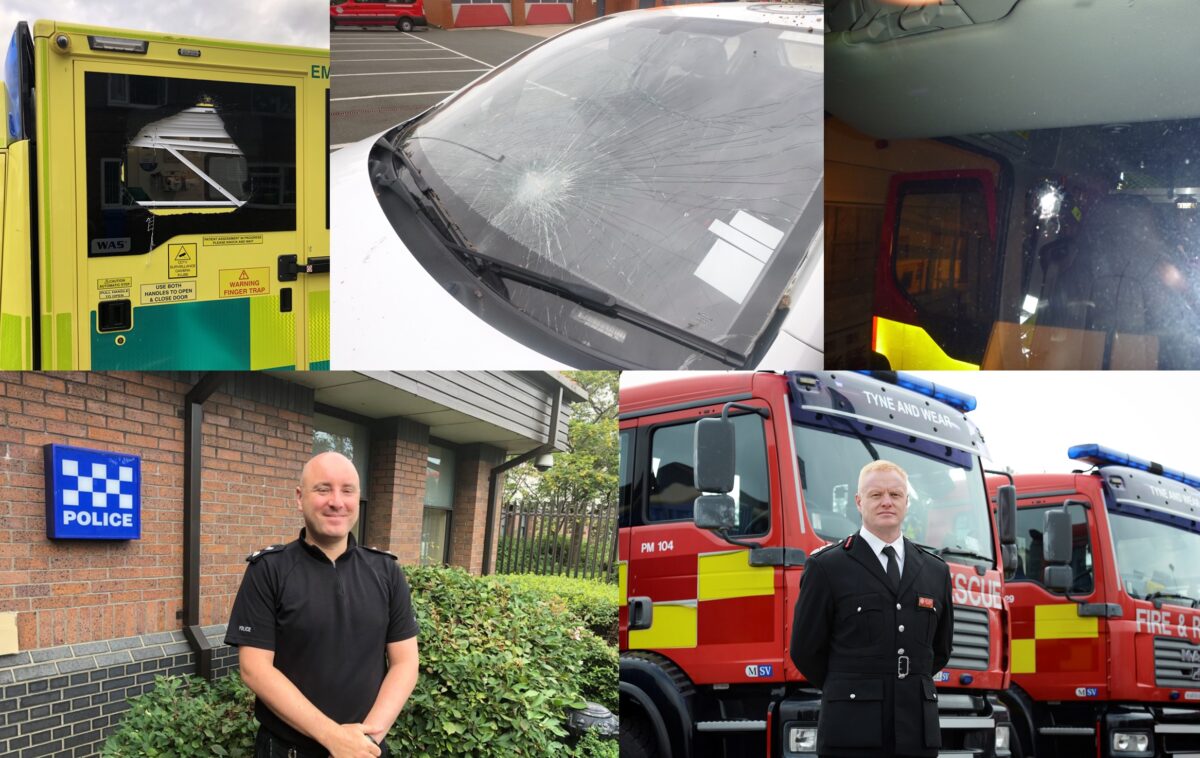 Attacked for just doing their job

The North East’s Blue light services are banding together ahead of the school summer holidays to shine a light on attacks on emergency workers.

Tyne and Wear Fire and Rescue Service (TWFRS), Northumbria Police, and the North East Ambulance Service (NEAS) have seen a rise in attacks on their operational crews over the last year.

Those responsible for these attacks are such a small minority however the damage they can do can be catastrophic to the blue light response in the region.

TWFRS operational crews were attack over 100 times whilst responding to incidents in the last year – a 30 percent rise on the previous year.

While, NEAS paramedics and medical staff have suffered 192 attack, and another 370 incidents of verbal abuse while responding to those who need them the most.

This includes incidents of physical abuse, sexual abuse and patient’s and members of the public lashing out at crews.

Now it has been revealed how this increase in attacks on emergency workers culminated in a shocking incident in Sunderland earlier this month.

TWFRS have revealed how a group of teenagers gathered outside Farringdon Community Fire Station on July 11th and hurled bricks at the building and their crews.

Nobody was injured but the doors of the station, which also houses the neighbourhood policing team, were damaged and a police car was also smashed.

Northumbria Police are carrying out enquiries about that incident and a 17-year-old male has been arrested and released under investigation.

Now blue light leaders have come together ahead of the summer holidays and called on parents to have candid conversations with their children to prevent further attacks.

Chief Fire Officer Chris Lowther said: “As we approach the school summer holidays we have noted an increase in attacks on crews and this needs to stop.

“The situations emergency workers put themselves in in order to keep our communities safe is incredible and it’s ridiculous that they should be attacked.

“Firefighters not being able to work due to injury or appliances out of use because of damage, it puts us all at risk. Our crews and officers are working in really demanding conditions because we are committed to keeping the public safe.

“These acts are being carried out by a small minority of people acting like this but their actions can be detrimental on us as a fire service.

“The majority of those responsible are teenagers who need to be aware of the consequences and we would ask parents to speak to their children and educate them about what they’re doing.

“We want to work with the public and our partners to make sure that things like this don’t happen, while holding those responsible to account.

Neighbourhood Inspector Phil Baker, of Northumbria Police, said: “Our blue light colleagues come to work each day to protect their communities and to help people.

“They regularly face challenging situations – but all-too often this can include needless levels of hostility and violence.

“I want to make it clear that this is totally unacceptable and it is important that anyone who shows such behaviour towards emergency service personnel is brought to justice.

“Violence should never simply be considered a part of the job – and we will take robust action against the minority found to have been involved in recent incidents.

“Enquiries are ongoing into the events that took place at Farringdon and anyone with information is asked to get in touch with police using the ‘Tell Us Something’ page on our website or by calling 101 quoting reference NP-20220711-1104.”

Alan Gallagher, head of risk and regulatory services at North East Ambulance Service, said: “Whether it’s intimidation and harassment, verbal abuse, inconsiderate behaviour around our sites, damage/vandalism to our property, nuisance calls and even calls for our assistance as a result of anti-social behaviour.

“This type of behaviour can have a direct and indirect impact on our services and staff. Anti-social behaviour is unacceptable, and dealing with the impact places an unnecessary burden on our resources and staff who should be focused of providing care in our communities.

“The majority of the public are kind and respectful to our staff, but the actions of the minority can have a lasting impact, on our staff and service delivery. Those people should be under no illusion that their actions will not be tolerated and we will work with our partners to help tackle such issues.

“We encourage our ambulance crews to wear body cameras throughout their shift, and support all colleagues in pursuing action against those who choose to abuse our staff or services.”

This week is national ASB Awareness Week and regional agencies are encouraging anyone involved in disorder to take part in one of the many diversionary programmes on offer.

You can report deliberate fire setting or any information you may have about attacks on firefighters anonymously.

You can report information to Northumbria Police through their website, by calling 101 or by calling Crimestoppers anonymously on 0800 555 111.

Or for deliberate fire setting call Firestoppers on 0800 169 5558 or report it through their website.