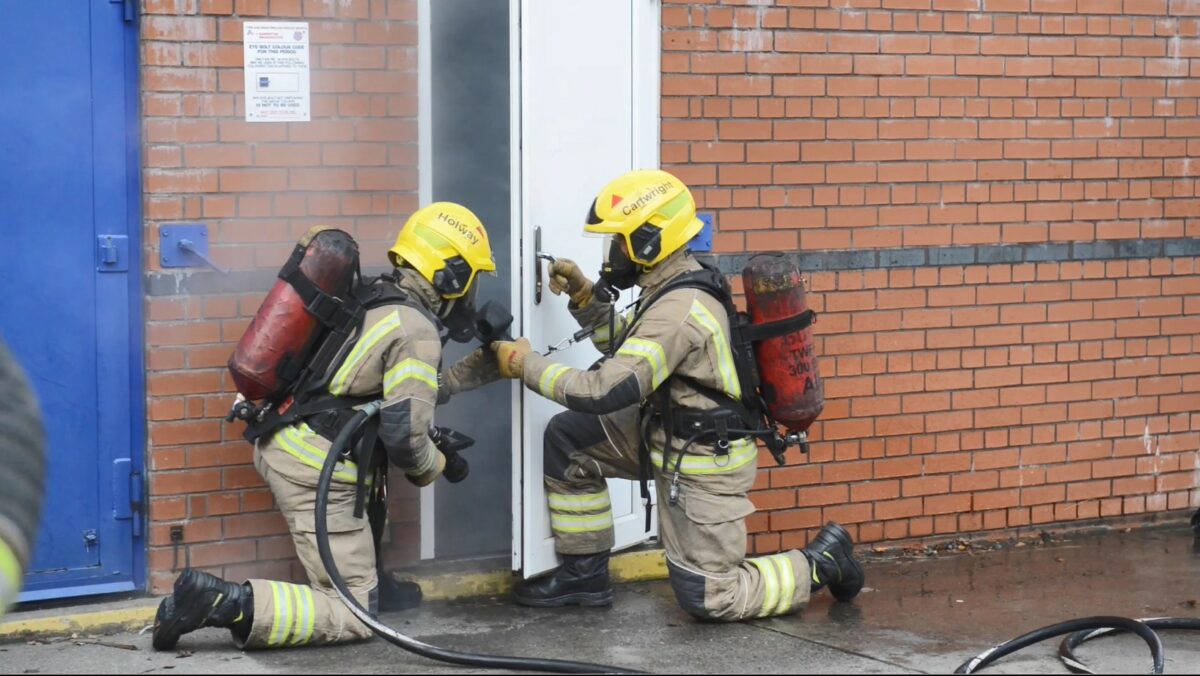 A new lease of life for a former Undertaker

A newly qualified firefighter has been giving a fresh lease of life after passing his final after giving up his job as an undertaker to keep his community safe.

In their biggest recruitment drive in years, Tyne and Wear Fire and Rescue Service (TWFRS) have welcomed 32 new recruits this autumn totalling 100 over the last 18 months.

And in that sea of new eager firefighters ready to keep our community safe, Graham Cartwright has swapped a herse for a fire appliance.

The 31-year-old from Blaydon has had an extremely interesting life that has seen him take on some pretty varied roles but all those roads have led to TWFRS.

Since starting Fire Cadets back in 2005, Graham has always known he wanted to be a firefighter but wasn’t able to pursue his dream at a young age.

Instead he chose to travel the world after being inspired on adventure weekends during his time in the Fire Cadets.

From teaching tree top challenges in Canada to working on a cattle station in Australia, Graham has spent much of his life away from the North East.

He returned just before the pandemic from living the high life in the French Alps and found himself looking for work when he came across a role as an Undertaker.

Graham said “I’ve always been interested in helping people and I’m the type of person who goes for anything when it comes to jobs as long as it’s interesting.

“There is a lot of trauma as you can imagine, and during the climate when I was an undertaker it was extremely tough but I think it’s helped me prepare for this role.

“You see people at their lowest moments and you have to help them through it, and I think that experience is really going to help me when I go out onto my station and I’m attending jobs.”

It was actually his mum, Barbara, who let him know that TWFRS were hiring for new recruits and even though Graham was enjoying his role as an Undertaker, he took the plunge and applied.

He said “This job incorporates everything I like doing into one, I get to help the public and be there for them during stressful situations as well as keeping my community safe.

“On the training course, I’ve found it great to be among people who are so different but also have the same mindset they want to be here and it makes it more enjoyable.

“And although it’s coming to an end, when we come to a job there could be a chance that we will bump into each other and get to find out what they’ve been up to and how they are getting on.”

And today (Monday) Assistant Chief Fire Officer Lynsey McVay, welcomes Graham and his fellow recruits into TWFRS and encourages more of the region to become part of the fire family.

She said “This recruitment drive is one of the biggest we’ve had in years and it’s great to see people with all sorts of work experience want to come and be firefighters.

“I’m so proud of how hard our recruits work to make sure they are in the best form possible when they get on station which reassures our community that we are working hard to keep them safe.

“Graham has worked all over the world gaining lots of varied experience but still keeping people at the heart of everything he does which is exactly what we do here.

“It’s heart-warming to know that Graham and many of our recruits are fulfilling their dreams of becoming a firefighter.

“I know exactly how incredible the experience can be and if they enjoy it even half as much as I have I will be so happy.

“Anyone can be a firefighter, you just have the determination, the heart and people at the core of what you do – we can teach you the rest.”

Graham and his fellow trainees passed out on Friday, December 17th, after completing a string of classroom based assessments.